I was welcomed to propose presenting something at the VIBE symposium. As it turned out, I ended up sharing different material as I didn’t get to draft my proposed new material in time, I missed the opening evening activities of the weekend, and was on two hours of sleep the next day when I went in to participate, in fem drag. As I write this now, I’m again up late hours facing deadlines; tonight my right knee has been pain flaring, while often my left is the one feeling more compromised. For a bit of context, I include a photo taken in Toronto several years ago. Meeting a friend in summer, I first visited a site marking Emma Goldman’s historic presence; my left knee was flaring more then and braced; the image shows a bit of my knee incision scar peeking out. I’m in typical inconspicuous androgynous-masculine style, taking a cheeky turn at Goldman’s plaque, yet mostly blending in with the gritty city blocks I traverse there. These aspects of my background—my usually utilitarian attire as a trans person, political affinities with anti-authoritarians, acclimation to urban littered environments, mostly passing as abled with some hints of medicalized conditions coming through, mustering of energy despite fatigue—all inform the creative work I performed at VIBE’s Art Night. 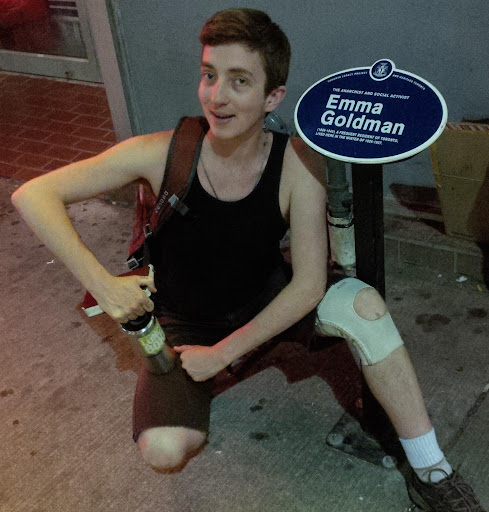 Figure 1. Seeley kneels in shorts and a black tank top on a sidewalk next to a plaque reading "Emma Goldman" with historic info. Sie is a white androgynous person with short auburn hair, smiling up to the camera. Photo credit: Tobaron Waxman.

As with many disabled writers, the pieces I shared were from first person perspective. There is value in articulating this way, yet an individual experience can feel over-emphasized. Something I so welcome about gatherings like the VIBE symposium are the opportunities to learn more deeply of our experiences reflected in and related to each other. The entire arc of various performers that night, solo and grouped, using different verbal and visual languages, was very satisfying to feel linked within. I offer another photo for some context of creative work in crip community that has fueled my practice: theatrical tableau staging, in this case as part of the Sins Invalid project. It’s from 2009, promoting an edgy scene in that year’s show. A Black disabled man, played by Leroy Moore, seeks BDSM play by visiting a professional domme in role as a doctor and eroticizing the vulnerability of being medically evaluated, but gets more control undermined and surveillance than he bargained for, while I play the dominant/doctor. This image highlights the way disabled people are expected to be performers for medical analysis, and also the artfulness we can enjoy when we intentionally bring together even our disturbing histories and assert ourselves in relation, collectively. 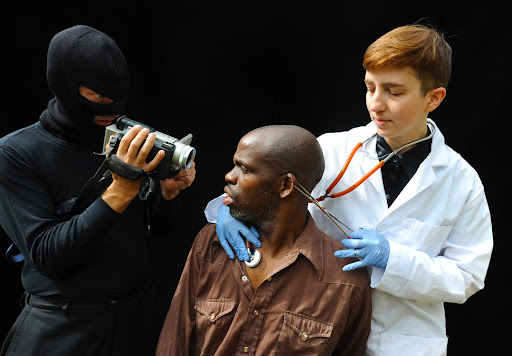 Figure 2. A bust portrait of three people standing very close together. Seeley in a white medical coat over a black satin shirt, turned in profile with attention on holding a pair of forceps on the earlobe of Leoy Moore Jr. next to hir. Seeley also wears a stethoscope and reaches the end against Leroy's body. Ralph Dickinson is on Leroy's other side, a white man in ski mask pointing a video camera right at Leroy's face. Photo credit: Richard Downing.

I’m motivated to keep sharing work as part of the larger waves ongoing of disability community art, and doing it with VIBE has been one highlight. I performed three short texts there, that I’ll share a bit from. The first was from 2001, originally integrated as part of a full solo theatre show I premiered that year for my undergraduate thesis project in Performance Studies and Gender Studies. It also can be read as a solo narrative or monologue, addressed to multiple characters: a statement about pivotal failure of a physical exam links to an address to a disabled father, then to an audience intentionally performed for, then to a back brace I wore at puberty for two years. It explores ways being degendered and dismissed by that medicalized status relate to my adult trans identity, and a sense of safety I’ve accessed in that history of invisibility.

To this day I armour myself with how I’m askew. I valorize and defile my experience; this is my self-mythologizing. I claim freedom in being so crooked, a moving target. I’ve inherited this fortune. And I’m determined to share it with you.” (“Sometimes a Friend”) 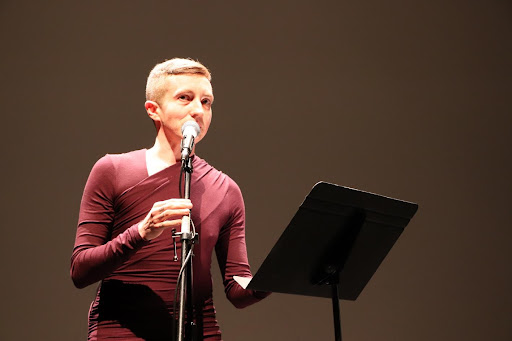 Figure 3. A closeup on Seeley standing at a microphone, with a sheet music stand to one side holding papers. Sie wears a purple form-fitting dress with asymmetrical neckline, and is highlighted by a bright stage light. Photo credit: Julia Salles.

My last feature was a lyric essay considering the move of a dear trans and environmentally ill person, from an urban toxic location to a rurally isolated and beautiful one, the challenges of human-generated chemical exposures and of solitude forced to escape them, poverty while chronically ill, and my own seeking a place of home in company with other ecologically stewarding queer disabled people.

I first visited him in August, first visited a desert then, his exile in the New Mexico high countryside. I experienced the day-to- day reality of mosquitos that I’d forgotten, the altitude and humidity just enough for them to easily breed and buzz for blood everywhere. Another friend thought they seemed the souls of indigenous folk who stayed restless without justice; perhaps visiting such an open landscape one can feel its generations of loss differently. (“Where Home”)

My path with arts has its own logic. With divorced parents in the early ‘80s each working in theatre and teaching college, the adults who raised me included their students, some of them budding drag queens. My role models worked with reading, writing, music, visual art and craft, and performance, and I was encouraged in my own writing since childhood. After dropping out of an insufficiently supportive undergrad environment, that I’d now say wasn’t equipped to deal with student crises from trauma- or neurodiversity-informed bases, I eventually transferred to a smaller institution intent to complete a final year of credits building a show about my experience as “crooked” on physical, mental, gendered, and sexuality levels. That creatively fruitful time launched me toward co-organizing, hosting and making new short performances monthly with a cabaret series for a year, and my active participation as audience and performer in communities of the San Francisco Bay Area’s queer, trans, and cross-identity coalitions, and eventually more explicitly in disabled communities. I joined DIY tours of trans artists performing mixed bills across the US in the mid-2000s, and was lucky to join by audition the second Sins Invalid show in 2007, as I remained an active performer and project contributor till leaving the Bay Area in 2015, and Sins’ work continues to inspire my politics.

Considering an assemblage’s flow, attending to the group journey for an audience and array of artists presenting different works, is quite important to me; I’ve organized a season of thematic film screenings as well, and practice this with the different disciplines and gatherings I curate in. The intention co-created with audience is sacred; my work with VIBE reflects my desire to link each contribution in context with each other, hoping the details of my performance elements on that stage, those of the other presenters in the symposium, and my histories inform receivers with some cohesion. Since VIBE I’ve been lucky to share work in different ways, including having my entire script “Crooked” publish in At the Intersection of Disability and Drama: A Critical Anthology. It can be ordered at https://mcfarlandbooks.com/product/at-the-intersection-of-disability-and-drama/. I’m also for now putting out more about my artistic pursuits at https://questletters.substack.com/.

Beyond those steps, I’m building toward larger scale projects that require funding and collaborators: a video shorts screening event by disabled makers, with makers’ Q & A and bilingually accessible with captions in French or English and audio description tracks; a live-recorded radio drama mini-series set in 15-years-future ecologically refashioned Montreal, with script devised with performers, majority racialized and disabled voice actors and tech crew, and companion website forums for audience discussion and education on plot and design topics; and a sexually charged stage play for two physically disabled characters and actors, with the characters unassigned genders for varying power dynamics via open casting, co-developed with trained and untrained performers. Despite language barrier and immigrant challenges, I’m committed to arts work in Montreal, activism to make social change here, and to scale up efforts linked with others internationally.

Seeley Quest is a trans disabled writer, performer, dramaturg, organizer, and environmentalist, in Montreal since 2017. Working primarily in literary and body-based composition, and curation, sie presented actively in the San Francisco Bay Area 2001-14, with the Sins Invalid project 2007-15, and has toured to Vancouver, Toronto, Ottawa, and many US cities. A poem’s in the book Disability Culture and Community Performance: Find a Strange and Twisted Shape, hir first digital game narrative debuted for National AccessAbility Week 2020, and sie’s performing an ecological assessment for Buddies in Bad Times’ Rhubarb Festival 2021. Sie inaugurated a poetry and prose workshop for disabled writers winter 2021 with the Quebec Writers’ Federation, and a “Queer Disabled Joy” movement workshop for Studio 303’s 2021 Queer Performance Camp. Hir playscript in progress, “Modeling” has developed in programs with Teesri Duniya, RealWheels, and Centaur Theatres, and sie participated in the UK disability arts Sync Leadership programme’s launch in Quebec. A white person with mixed class, gender, and medicalized experiences since childhood, sie loves connecting audiences for co-learning and social action. Not on social media, find hir via email at https://questletters.substack.com.