The following is the working script from Montreal-based artist Michael Nimbley’s presentation about his professional career. The script was co-created with his creative ally Catherine Bourgeois, the founder and artistic director of Montreal-based theatre group, Joe Jack & John. Joe Jack & John is a theatre company that produces original, bilingual, multidisciplinary shows combining video, dance, and the spoken word. Their artistic approach is deeply humanistic and inclusive; their creations represent a social microcosm by integrating professional actors with an intellectual disability or from diverse cultural backgrounds. During the time of VIBE, Nimbley was an artist-in-residence with the company. In establishing artistic residencies, Joe Jack & John are fulfilling their mission in a new way by inviting an artist living with a disability to initiate and direct a creation of their own. These residencies demonstrate a unique political stance. By handing power to an artist with an intellectual disability, they are furthering their research on marginalized aesthetics and voices. Their goal is to develop interdependent creative models and practices, promoting the emergence of underrepresented voices that have not been part of the dominant artistic trends. In doing so, they are disrupting aesthetic hierarchies and continuing to dismantle biases against artists who evolve outside the artistic establishment.

Michael Nimbley, who has participated in four of Joe Jack & John’s productions, is the company’s first Artist-in-Residence and has been developing his project Les waitress sont tristes since 2018. Les waitress follows one nomadic man’s journey through a labyrinthine universe as he constantly confronts the status quo… Meanwhile, the waitresses are constantly asking themselves: “Why are we sad? Why are we mad?” Music and escapism are the life rafts that these characters cling onto as they repeat the same gestures over and over again. Like a modern-day Western, Les waitress takes us on a wild ride that features a mountain, a bar, and a railway track. There are stories of drunken cats; souvenirs; beer bottles, and line dancing… Production is scheduled for the fall of 2022.

Catherine Bourgeois has been making theatre since 2002. She began in set, costume, and lighting design before devoting herself to creating and directing performances for Joe Jack & John (JJJ), which she co-founded in 2003 and for which she designs and directs all productions. She won Best Director at the Gala des Cochons d’Or for her show AVALe in 2014, and for Just fake it in 2012. Just fake it was also awarded a LOJIQ grant. From 2006 to 2013, in parallel with her life at JJJ, Catherine worked as production manager and assistant to choreographer Margie Gillis, familiarising herself with many different artists, cities, and stages. From 2005 to 2008, she was an Associate Director at Imago Theatre. Other credits include directing Théâtre La Chapelle’s award-winning 2008 production of Michael Mackenzie’s The Baroness and the Pig. Catherine studied directing at London’s Central School of Speech and Drama as well as set design at UQÀM and at the Option-Théâtre in Ste-Thérèse. In 2018 she won the Mid-Career Artist Prize from the Faculty of Arts Foundation at UQÀM. She also teaches in the acting programme at the National Theatre School of Canada.

My name is Michael Nimbley.

I have had many different jobs during my life.

I had a job working on a farm. I was picking up eggs and milking the cows.

Then, I went to join a group called Les Muses to study music, dance, theatre, and improvisation.

At 50, I got my first job as a professional actor.

Now, I am 62 years old. Being an artist is my last career.

Catherine: What is your chief characteristic?

Michael: Frustration. Sometimes, I become frustrated and impatient. When it happens, I go take a walk.

Catherine: What is your idea of happiness?

Michael: When I do my puzzles, I become happy and calm. When I have time.

Catherine: If not yourself, what would you be?

Michael: A cougar on a mountain.

Michael: In the countryside, because it’s quiet and peaceful.

Catherine: What is your present state of mind?

My first show was in Concordia University for Art therapy.

I was playing the part of Geppetto in the show PINOCCHIO.

One of my line was: « I created a masterpiece ».

I was playing Docteur Faust.

The year after, I started working with Joe Jack & John.

I was playing the main character Elvis.

And I started to sing the song « Are you lonesome tonight ».

After, there was JUST FAKE IT. With this show, I won Best Actor Award at the Gala Cochons d’Or.

With JUST FAKE IT, I traveled a lot. I went to Québec, Rimouski, Laval, Liège, and Berlin.

After that, I did two other shows with Joe Jack & John. They were called AVALE and ABÎMÉS.

Now, I am associated artist at Joe Jack & John. I work on my own project. I am the co-director, writer and actor of this new project.

The title of my play is The waitresses are sad (en français: Les waitress sont tristes).

WHEN THE WAITRESSES ARE SAD

Catherine: Can you summarize your play?

Michael: The show is about sadness and friendship.

The main character of my show is called Morrison.

Tania is a waitress. She writes and composes music for Morrison.

Rose is a friend of Tania. She works as a waitress and dancer.

Tania and Rose want revenge, so they plan to blow up the western bar. But unfortunately, Morrison was in the bar when the explosion happened.

And that’s why the waitresses are sad.

Catherine: What is your inspiration for this play?

I want to do a show inspired by the music of The Doors.

I really like the song Riders On The Storm.

Here are ten words of inspiration for me:

Morrison, an unattached man, wanders from western bar to western bar. In a small town without history, he fraternizes with waitresses who deceive the sadness of their daily lives by repeating the comforting gestures of a perpetual line dance. Stuck in their unchanging routine, the waitresses come up against Morrison's flight, unable to remain in place despite the loneliness imposed on him by his nomadic life.

In creative residency with Joe Jack & John, Michael Nimbley, regular actor of the company (Mimi, Just fake it, AVALe, Abîmés), explores the archetype of the drifter by making us visit (and revisit) a bar, a mountain, stories of intoxicated cats, a mechanical plush toy, and the hypnotic movement of an electric slide that never seems to want to stop. Halfway between performative theater, dance and music, Les waitress sont tristes takes a tender look at loneliness, sadness, and the various dead ends that shape our lives.

With this first artistic residency, Catherine Bourgeois, artistic director of Joe Jack & John, wishes to broaden the company’s mandate by inviting an artist living with a disability to take up key positions in creation. The human, logistical, and artistic support offered by the company aims to allow the emergence of a raw word and an aesthetic rarely explored on current stages. 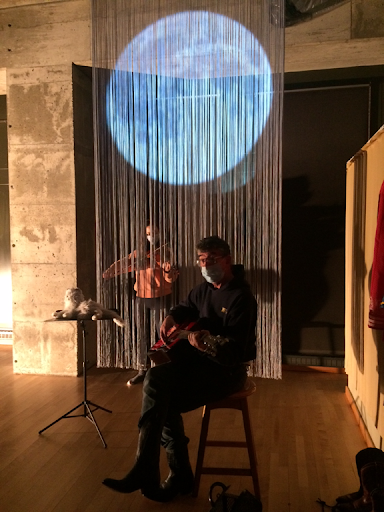 Rehearsing a scene of Les Waitress sont tristes, Michael is playing music with his colleague Anna Atkinson, one of the waitresses. A cat and the full moon are big parts of Morrison's drifting life. 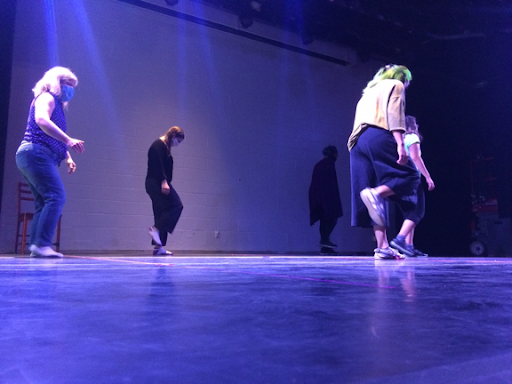 Five actresses are practicing line dancing in a studio. It is part of their characters' development, to act as the Waitresses. In the picture : Stephanie Boghen, Anna Atkinson, Angie Cheng, Tamara Brown and Anne Tremblay. 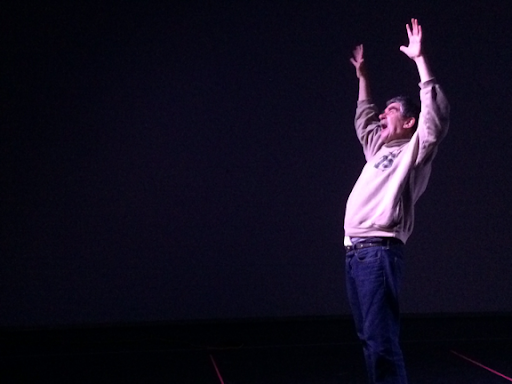 Michael is working on a scene where Morrison is consumed by anger and despair. His long desperate scream is heard in the night.